Hans Ruesch, the father of the modern anti-vivisection (anti animal experimentation) movement died on Monday, September 3rd, 2007 at age 94. If we measure a persons greatness by the extent to which they expose and seek to eliminate suffering and are prepared to dedicate themselves to this end despite persecution, then Hans Ruesch was the most important person in the world today.

A book called Ideas that Changed the World list him along with Einstein and Gandhi as inclusions from the 20th century (all vegetarians/vegans). The Guiness Book of  Records listed him as the most litigated person in the world. These two facts speak volumes about him and the world we live in today.
A genuine anti-vivisectionist he forced a referendum on the elimination of vivisection in Switzerland, the country which had and still may have the highest number of animal experiments per capita due to pharmaceutical companies. He was also instrumental in helping Italian parliament to vote for the elimination of vivisection and brought this about in South Tirol. No-one has ever come closer to exposing and eliminating this, the most despicable crime ever committed. His ideas should have changed the world and would have if his books and words were not so successfully suppressed. If we do not hear them then there is little hope. Please buy his books, read them and for the sake of laboratory animals, spread the truth far and wide. Go to www.dlrm.org and other sites.

In the footsteps of Hans Ruesch, other scientific/human health anti vivisectionists have trod a similar path, persecuted and opposed, but never to the extent that he was. These include Dr Vernon Coleman, Dr Andrew Knight, the doctors of the Medical Research Modernization Committee, The Safer Medicines Campaign, the Physicians Committee for Responsible Medicine, The Campaign Against Fraudulent Medical Research, Dr Moniem A Fadali, Dr Ray Greek, Professor Pietro Croce Bette Overell. Please look into to these sites.
What a life Hans had! Grand Prix winner, best selling novelist (selling millions of books, some made into Hollywood films) and most importantly by far, the most successful anti-vivisectionist of all time.

Here is something I wrote in 2004: In June last year I had the honour of meeting a man who is truly the founder of scientific anti-vivisectionism and the most effective anti-vivisectionist in the world, Hans Ruesch. I admit that I was unaware that he was still alive until shortly before then. I was travelling in Europe and so decided that I would go through Lugano in Switzerland for the purposes of meeting the man who is a hero to me and would be to anyone who knows the truth about vivisection and his tireless efforts to expose and stop it. When I arrived at his address I found that he lived in a flat, his significant wealth taken by having to defend constant foundless litigation. I did not know which was his and was lucky that just then a man walked up and said in English, "I'm here to see Mr Ruesch, who are you here to see?" I met an 89 year old man, very modest and not requiring my compliments and still writing an entire book in four languages without help despite ill health and constant persecution which caused him to leave his country for years.

Hans was born in 1913 as a Swiss citizen to a Swiss couple who was living in Naples, Italy, he grew up multilingual, studying first in Italy and then in German speaking and partly in francophone Switzerland - Zurich and Geneva. As a very young man he embarked in a car racing career which took him all over Europe and Africa. He established two world records at nineteen and went on to win the British Grand Prix of the time. 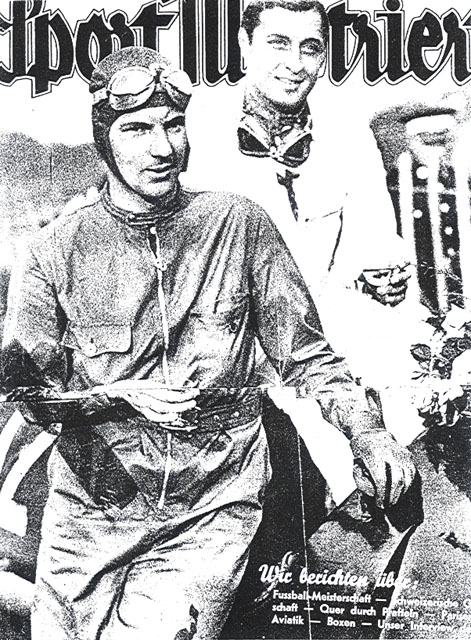 But he felt that literature was his calling, and in 1938 he sailed to the USA, where he was one of the few European writers to succeed in publishing short stories and articles in America's leading magazines and newspapers of the time. In 1950 Harper Brothers published his first American novel, set among the Eskimos: Top of the World, which had by 1989 sold over 3 million copies world wide and was also filmed, starring Anthony Quinn. Kirk Douglas starred in another film taken from one of Ruesch's novels, The Racer.